By EvrosDecember 22, 2020IT Support and Licensing In this feature, Microsoft Practice Director, Gerry Kerr, discusses all things Teams, including the licencing options available for businesses today.

Who would have thought that 2020 would have become the remote working year?! The changes in work practices driven by the pandemic have been both sudden and dramatic, resulting in everyone getting used to very different way of working.

One of the big winners from the Microsoft stable has been their Teams product – on all levels including telephony, chat, video or collaboration. Practically anyone with an Office 365 account has access to it and its use has become a de facto standard in most enterprises.

The good news from a licencing perspective is that Teams licences are relatively straightforward – especially compared with the complexities of Dynamics or Power Apps.

A point of housekeeping, with cloud services – I tend to use the term “subscription” and “licence” interchangeably.

The Evolution of Microsoft Teams

Teams is the next generation of Microsoft collaboration platform with roots going back to Live Communications Server (LCS) in 2005. This was a simple tool which enabled IM presence, with limited audio, video and application sharing.

The new Microsoft Teams platform combines all of the features Skype For Business, builds in persistent chat, integrates OneDrive/SharePoint online for file storage and sharing and an extensible interface to allow apps to be installed to extend the application.

For me, one of the most transformative features of Teams is the ability to have Teams setup as a full featured PBX or telephone system – a feature that goes back to the OCS product, first introduced in 2007.  The easy transition from chat to a screenshare, to a telephone call, to a video call and by adding users to a full conference call is seamless and is central to the impact Teams has on organisations.

Nearly all of Microsoft cloud bundles include Teams – as outlined in the following table:

Unlike Skype For Business online, which had plan 1 and plan 2 variations, Microsoft is provisioning a single version of Teams in all licence bundles, giving everyone the same base features which include:

To move beyond these core services, there are a growing collection of “add-on” licences that extend the base licence above. With a few exceptions, all of the add-ons need one of the base licences in the bundles above.

Teams Room Standard: Various manufacturers offer a number of devices that serve as standalone Teams client devices and offer a single touch join user experience.  These vary in complexity, but the typical device will have an assigned extension and persona and a single touch join experience. They can have audio and video or just audio only. Any room system such as the Poly Studio X Series or the Logitech Tap Series would qualify. These require a meeting room system licence. Audio only, spider phone type devices can have an audio-conferencing licence, or a meeting room system licence assigned (see Audio Conferencing below). The meeting room licence includes an Intune licence, allowing the device to be managed. This is a standalone licence.

Teams Room Premium: Microsoft has recently offered a premium tier of meeting room licencing that includes proactive monitoring, automated diagnostics and a level of dedicated support directly from Microsoft for the room. This licence is an additive licence and requires an underlying Teams room standard licence. It also requires a certified room system device. A full list of certified devices is available on the Microsoft website.

Microsoft Business Voice: This is a subscription aimed at organisations with less than 300 users. It can be assigned as an add-on to the Microsoft business bundles and adds both voice and audio-conferencing services. If you are using the Microsoft business bundles, you can use this add-on instead of buying a separate phone system and audio-conferencing licences. You can also choose to add the phone system licence, if that suits your needs better – for example, if users do not need audio conferencing.

Audio Conferencing: The Audio-Conferencing add-on allows a user to publish a dial-in number when creating a meeting. It is only required for those users who need to be able to publish the conference bridge and has no impact on any users using a Teams client or browser plugin to publish or participate in a conference.
Note: if a toll-free number is being used, then you will need to add communications credits and assign a communications credits plan to the users that need to use the toll-free numbers. Communications credits are pre-purchased, and you can switch on an automated top-up system to ensure no loss of services. This licence is an add-on licence and requires an underlying Teams licence.

Advanced Communications: This is a recent add-on subscription and is designed to enhance the capabilities of Teams meetings and live events. The main changes enabled by this add-on are:

This is an add-on licence to an existing Teams licence and only those people who need to host advanced events require this addon licence. Note – some of these features are still being rolled out.

Calling Plans:  If you decide to make Microsoft your telephony carrier, you will need to subscribe to a calling plan. Each user who is assigned a calling plan is assigned a DDI and a block of credits depending on the plans. If you have existing numbers that you wish to keep, these can be ported to Microsoft. There are both domestic, and international and combined plans, to suit most needs.

How we can help

By moving to a cloud-based telephone system, businesses are able to work in a much more unified and agile manner.

Read more about how we can help you optimise your Software Licencing through our Evros Affinity Software Asset Management services. Or get in touch to organise a consultation with our experts. 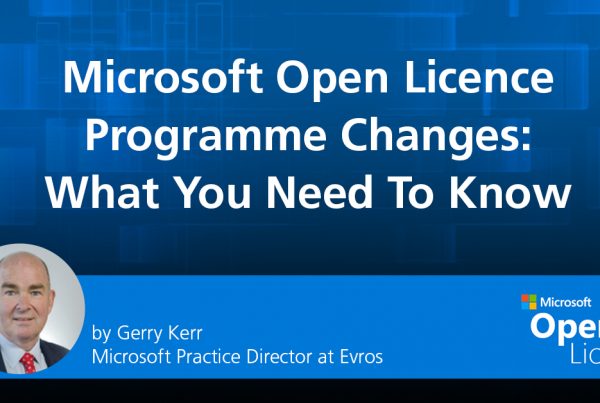 IT Support and Licensing
December 1, 2020

Microsoft Open Licence Programme Changes: What You Need To Know